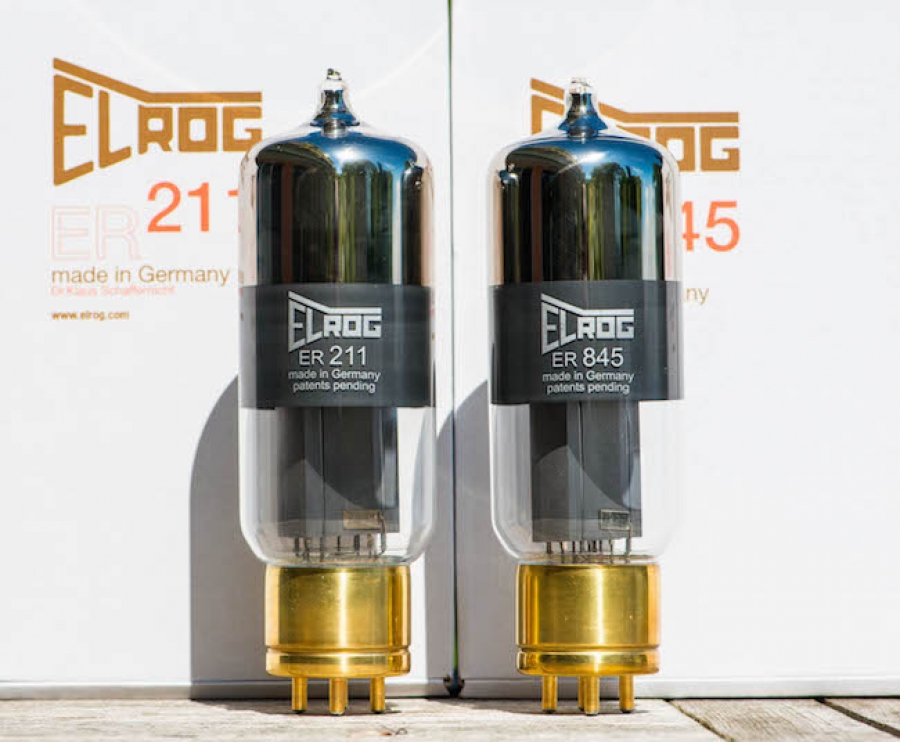 The Tubes are made to be compatible with the 211 and 845 types. The only difference is the heat distribution which is more directed towards the base in the new tubes. This is not an issue for any well constructed amplifier.

The old tubes produced by Telefunken Gesellschaft für drahtlose Telegraphie m.b.H have a legendary reputation and are highly sought after, especially in Asia.

Telefunken was founded by a fusion of Siemens & Halske and AEG.

After WWII the facility in Ulm continued thr production of transmitting and receiving tubes and later cathode ray tubes.

Tube production reached it’s zenith in the 1960s and vacuum tubes started getting replaced by transistors.

The Ulm factory was sold to the french company Thomson in 1979 and was shut down two years later.

The story would have ended here if there wouldn't be a former Telefunken employee who is still producing vacuum tubes up to this day. 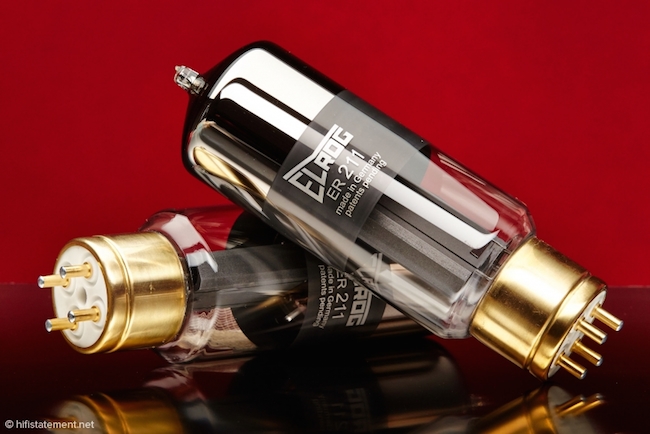 This is Dr. Klaus Schaffernicht, who founded the company ELROG 1986 in Lüneburg and moved to the city Lübtheen in Mecklenburg-Vorpommern. Schaffernicht probably is the last manufacturer of audio tubes in Germany.

As described in a previous article, the production of vacuum tubes is not a trivial matter.

Unfortunately the know how needed for that is mostly lost. Tube enthusiasts suffered from this when they retubed their beloved equipment with cheaply produced tubes from far east

Therefor the audio scene is lucky to have a company like ELROG which does not the necessary know how only but the production equipment also. Now tubes can be produced again with the quality and performance of the old Telefunken types.

When Schaffernicht decided to make audio tubes it was clear to him that he would not just build mere copies of the old General Electric or RCA types.

The Elrog ER211 is quite impressive with it's height of over 20cm. In the middle an original General Electric 211 for comparison shown here in the military version VT-4-C.

Elrog tubes not only look differently, their construction differs as well. Some smart ideas have been applied. The most obvious difference is the way how the electrodes are mounted.

They are not placed in the upper part of the tube on a long glass stem as in a light bulb.

The electrode system is mounted close to the socket which gives shorter signal paths and a mechanically more stable construction for reduced microphonics. As in the old tubes, thoriated tungsten filaments are used, the “trademark” of transmitting tubes like the 211 and 845.

These operate at temperatures around 2000º Celsius and have a bright yellow-white glow. Similar to the historic tubes, Elrog uses graphite plates which are milled from a solid block. They exhibit an improved plate dissipation rating of 80W.

This also allows higher output powers up to 25W in single ended amplifiers. The dark area in the middle of the tubes is a graphite coating. Through this it is possible to make an electric contact to the getter.

The getter is a metallic compound, usually some barium alloys, which absorbs gas molecules.

Dr. Schaffernicht didn't want the getter to be electrically floating as in other tubes. The getter is connected to the plate through springs at the sides of the electrode system. These also provide mechanical stability

The photo shows the assembled triode system. The M-shaped wire is the cathode. The four springs at the upper end provide contact to the getter. At the top the ring can be seen which holds the getter material before it is flashed after evacuation. On the right side the plate which is milled from a block of graphite

The 211 is a directly heated transmitting triode. It's advantage is a very good linearity. The thoriated tungsten filaments need a much higher operating temperature than oxide coated filaments. The 211 requires very high plate voltages exceeding 1000V.

The filament needs 10V at 3.25A which is not an easy task to provide since it needs to be very clean for best sound. Ideally the filaments are heated from a DC source.

AC is possible but results in residual hum due to the high filament voltage. The tube also needs a capable driver with low output impedance which can provide 150V peak to peak

Otherwise the sound would be dominated by the non sufficient driver tube and not by the output tube. All in all not recommended for beginners in DIY.